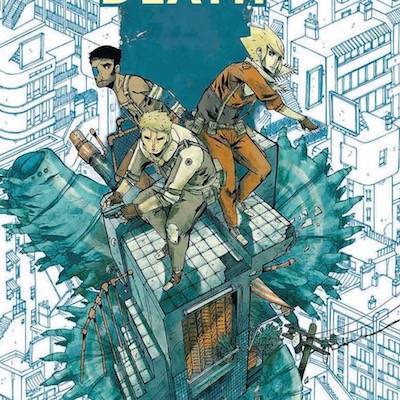 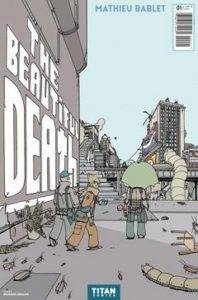 Cover A by Brandon Graham

Solicit: THE APOCALYPSE HAS BEEN AND GONE. THE AGE OF HUMANITY IS AT AN END. HORRIFYING INSECTILE ALIENS FROM THE DEPTHS OF INFINITE SPACE ARE NOW MASTERS OF THE EARTH! WHAT DOES RESISTANCE MEAN, WHEN THERE’S NOTHING LEFT TO FIGHT FOR? THAT’S WHAT WAYNE, JEREMIAH, AND SOHAM, THE ONLY SURVIVORS OF THE DEVASTATING INVASION, STRUGGLE WITH – SEEKING A GLIMPSE OF A FUTURE THAT JUSTIFIES THEIR FUTILE PRESENCE ON A RUINED WORLD. AS THEY PICK THROUGH THE REMAINS OF HUMAN CIVILISATION, KEEPING OUT OF REACH OF THE BUGS, NONE OF THEM SUSPECT THAT THEY ARE PART OF A MUCH LARGER PLAN, ONE THAT INVOLVES ANOTHER, UNKNOWN SURVIVOR…

For a while now Titan has been translating some amazing European comics for American readers.  The Beautiful Death is the latest and it’s a wonderful introduction to French cartoonist Mathieu Bablet.  While the script can come off as a little clunky at times mainly due to to translation, I’m sure it’s a beautiful read in French.  Bablet’s art is the star here with highly detailed panels that reminded me of Ulises Farinas and Simon Roy featuring amazingly detailed city scapes.  The story is a bleak tale of 3 survivors of an alien insect invasion that seems to have wiped out the human population of earth.  Bablet’s strange, angular, but amazing art style doesn’t do much to give the reader an idea of his character’s ages, but his dialogue makes them feel young as they explore vacant nameless cities looking for food and comfort.

There was one scene that really stood out for me where two of the characters have a discussion about saving the third who, by accident, ended up in a precarious situation that could get them all killed while attempting a rescue.  Bablet is writing a bleak look at a future where the war with an alien insect menace seems to have ended and the few survivors left wander abandoned cities trying to hold on to the memory civilization.

The Beautiful death is an artistic masterpiece and while the dialogue can come off as definitely translated, the story still evokes a desperate and lonely look at life after the fall of humanity.