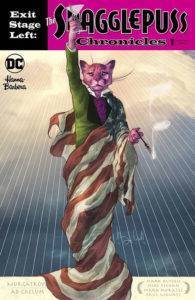 Solicit: It’s 1953. While the United States is locked in a nuclear arms race with the Soviet Union, the gay Southern playwright known as Snagglepuss is the toast of Broadway. But success has made him a target. As he plans for his next hit play, Snagglepuss becomes the focus of the House Committee on Un-American Activities. And when powerful forces align to purge show business of its most subversive voices, no one is safe!

Mark Russell, the writer that turned The Flintstones into a brilliant, biting satire of contemporary society, is back to flip another Hanna-Barbera property on its ear. Russell seamlessly merges the anthropomorphic world of Snagglepuss into the great melting pot of 1950s New York, where artists and homosexuals are being targeted as subversives by the paranoid government. Snagglepuss’s over-the-top, effeminate mannerisms are gone – he’s not here to be mocked for his lisp or wacky behavior. This Snagglepuss is a star, but one that has to hide his homosexuality for fear of persecution and even criminal prosecution.

The animals are just another part of everyday society – so much so that the human (and otherwise) cast members of Snagglepuss’s play are in costume as felines. Honestly, aside from a that, a few sly references in the dialogue, and a cameo by Huckleberry Hound, this could have been completely removed from the cartoon elements and presented as a human period piece. But Russell contrasts the darkness of this time in American history against the wackiness of the original source material. Russell’s script is packed full of heart and wit. I especially loved the addition of prosecutor Gigi Allen, crusader for all that’s good and pure about America, which is a punk rock reference so obscure I’m stunned I got it.

Mike Feehan’s art style isn’t what you’re going find illustrating cosmic giants and exploding planets. But his realistic take is the perfect choice to meld the cartoon world with ours. Feehan humanizes the animal characters while shying away from a more animated style, making them fit right in alongside their human counterparts. Feehan’s work is very solid here, and would have been right at home at Vertigo with the likes of Pia Guerra, Steve Dillon, and Peter Gross.

The world doesn’t NEED DC’s weird adaptations of old comic properties, but thank god Mark Russell and his collaborators are here to make them so unbelievably enjoyable and relevant. Russell and Feehan have created an evocative look into one of the darkest times in 20th century American history, viewed through the lens of one of its most ridiculous fictional characters and it’s brilliant.