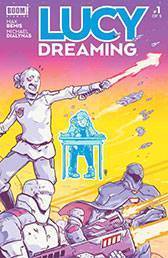 Art by Michael Dialynas
32 pages for $3.99
Solicit: In her dreams, Lucy is the hero of all her favorite stories, living each night as a grand adventure. These journeys will teach her more about herself and the real world around her than she ever expected!
Lucy is a typical 13-year-old, a moody teenager mad at the world around her, mad about her body, and just mad in general. She’s also an obsessive reader of violent sci-fi and fantasy novels, her only escape from her misery. But one night she discovers that the vivid dream she’s having is more than a dream – she’s slipped into another world in the middle of an intergalactic war with real life or death stakes.
Max Bemis is a writer that I generally enjoy. I got a kick out of his Oh, Killstrike mini  couple years ago and his run on Moon Knight was awesome. I found his dialogue to be a little insufferable at times here – mostly with Lucy’s internal monologue. Hormone-addled teenagers displaying a level of awareness, about themselves and society, that most adults don’t even possess is one of my biggest pet peeves in fiction. I get that she’s the main character and she has to be fully formed, but it’s just a bit much. But, Bemis does a great job with the banter between characters. The dream world Lucy finds herself in is a hilarious Star Wars homage, with a cocky rogue named Barc Landin, a mashup of Luke Skywalker and Han Solo. I laughed out loud when Lucy discovered the brutal consequences of the blaster rifle she picks up.
Michael Dialynas is fresh off his work on The Woods with James Tynion IV. I didn’t keep up with that series, and I forgot just how good this guy is. He’s shifted to a slightly more exaggerated, cartoony style for this book and it fits perfectly. My favorite thing about it is how he draws the characters’ mouths. I know that sounds weird, but he draws them as these long ovals with the teeth nested inside, and I know that doesn’t make sense, but it reminds me of Nick Park’s Wallace & Grommit designs. Dialynas also does a brilliant job on colors. The real world has a subdued palette with the environments sort of fading into the background, and then everything shifts into bold focus in the dream world, with bright hues that look almost like they were applied with a watercolor brush. And despite the exaggerated style, his backgrounds are beautifully detailed.
Aside from some rough dialogue at the beginning, I really enjoyed Lucy Dreaming #1. The concept is really fun and the art is phenomenal. This is definitely a series to watch.
Rating: BUY IT