‘Gems in the Bin’ is a new weekly column at the Two Headed Nerd where I review a comic book that I pulled out of the $.25 bin at my local comic book store. Will I strike gold or will I pay too much for an awful comic that should have been shredded? Let’s check out my first selection, DC’s Star Trek #3 from 1989.

I made a trip with my son to Fanfare Sports and Entertainment, my local comic book store in Michigan, last Saturday to pick out my first comic for ‘Gems in the Bin’. My son is four years old, and he was more interested in the Hot Wheels they had for sale than comics. After he selected a car for himself and one for his sister, we made our way to the $.25 bin to get a worthy comic. After less than a minute of perusing, I found an absolute steal.

I found a comic written by Peter David in the $.25 bin. If you know the name Peter David then you should be familiar with his writing for The Incredible Hulk, which earned him an Eisner Award in 1991. David has not only written comic books, but has been a writer for TV shows like Babylon 5 and Ben 10. The comic book I found was a Star Trek comic, so I knew I was looking at a winner. As I picked up the comic from the bin, I could hear
George Takei saying, “Oh, myyy!” in my head.

I was not familiar with the Star Trek comic because the late 80s was a down time for me when it came to comics. I had discovered Led Zeppelin, The Who, and Black Sabbath circa 1988, and music became my obsession. I would later have a brief reunion with comics in the mid 90s, and then a break up occurred during the late 90s, but I was reunited by the early 2000s.

After a few reads of Star Trek #3 titled ‘Death Before Dishonor’, I was very pleased with my purchase. The issue has the crew of the Enterprise dealing with two major issues: Klingons and a war between two bug-like alien races. If I were a real Star Trek fan, I could tell you more about the bug-like aliens, but I’m certain you Trekkies have this figured out. Maybe. Kirk and Spock are able to buy some time to keep peace between the two bug-like races, but the Klingons attack the Enterprise while cloaked, and Kirk gets very creative in stopping their attack. With the Klingons out of the picture, Kirk and the crew discover that peace has not been kept between the aliens. Kirk must outwit an antagonistic bug-alien to bring peace between the factions.

Peter David does a great job as the writer to deliver a well-paced comic book that blends suspense and action. This was not one of those comics where the dialogue is so heavy that you have to flog yourself to get from page to page. While the writing was good, I was pretty much impressed with the pencils by James W. Fry. The action sequences were his strong point, but there were a few panels that came across as unintentionally silly. Also, the cover itself was not a complete seller due to the fact that the color was very dark and grainy.

There is nothing like a quarter well spent, and after reading this Star Trek comic, I’m going to try and find some more back issues at my local comic book store. 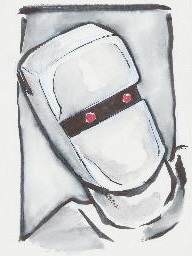