Superman Unchained #1 (DC)
As a child of the 90s, Jim Lee’s art strikes a particular chord with me that I can’t help but love. His work has never looked better in this issue & the story that Snyder sets up is compelling.
Rating: BUY IT

Thumbprint #1 (IDW)
Based on a book by Joe Hill, this first issue brings real life events into the world of comics. Mysterious and thrilling I really enjoyed this first issue and want to read more.
Rating: BUY IT

The True Lives of the Fabulous Killjoys #1 (Dark Horse)
Gerard Way proved to me that he was the exception to the rule of celebrity comic writers with The Umbrella Academy and he proves that he’s not a “one trick pony” with this first issue. I’m totally hooked by this, the art is amazing and the story is crazy and compelling.
Rating: BUY IT

American Vampire- The Long Road to Hell #1 (Vertigo)
It’s great to have some American Vampire back in our lives! You don’t have to have ever read any before to enjoy this, it’s a standalone, double sized one shot issue that is worth every penny.
Rating: BUY IT

Six Gun Gorilla #1 (Boom)
I WAS NOT EXPECTING HOW AWESOME THIS WOULD BE. Holy wow this was a surprise. Great first issue, you have to get this one way or another.
Rating: BUY IT 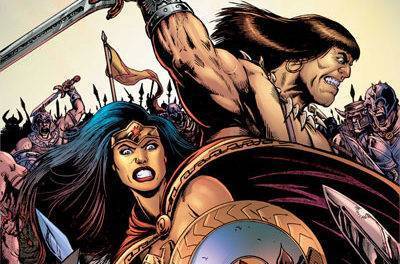