Lazarus #1 (IMAGE)
The art left a little to be desired in this with some inconsistencies in quality, but regardless of that the premise and writing of the story really hooks you. I want to learn more about this world and the forces at work here, this is a book you don’t want to miss.
Rating: BUY IT

Superman / Batman #1 (DC)
The story is a great introduction to this New 52 version of Batman / Superman. The art will throw a lot of people off, I like the style but it’s not for everyone. The story is well told and the hook makes you want to read more. .
Rating: BUY IT

Larfleeze #1 (DC)
I haven’t been reading much of the Lantern stuff in the last few years so I wasn’t really familiar with this character much. The script isn’t bad and the art is bursting with energy but if you aren’t a big Lantern person this probably won’t hook you much, it didn’t for me.
Rating: SKIM IT

Age of Ultron #10AI (MARVEL)
This is really a .1 issue for Avengers AI and a reintroducing of Pym as a main character in the Marvel U. I’m a sucker for robots and have high hopes for this series, pick it up!
Rating: BUY IT

Uncanny #1 (Dynamite)
This was a good if not someone recycled feeling first issue. I liked the hook and the supernatural noir feel to it. I think this is work checking out for at least a few issues, flip through it and see for yourself.
Rating: SKIM IT 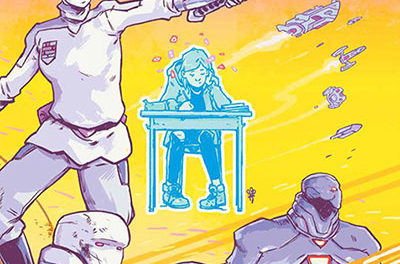