Between the Balloons: Mark Russell 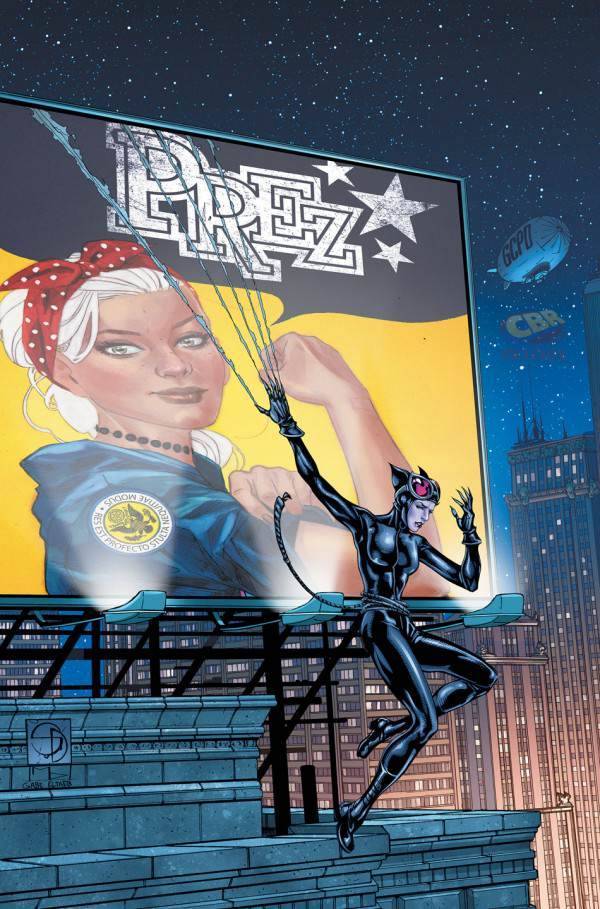 Mark Russell is the recent writer of the critically acclaimed Prez series in 2015 and the current writer of the social commentary take on The Flintstones.  We got a chance to talk with the actual president election a week away, but also on the eve of DC’s Election Special which sees a return of Prez.

Ryan Mount for Two-Headed Nerd: The Prez “Finale” is scheduled to be published this Wednesday as a 12-page story in Catwoman: Election Special #1.  Do you believe this will be a true series send off or tie up some loose ends left after issue #6?

Mark Russell: I’m hoping this isn’t the last we’ve seen of Prez, but right now there are no plans to do anything more with it. The 12 page election special doesn’t really tie up any loose ends or bring any resolution to the story. It doesn’t even really have anything to do with the election. It’s just another story in the Beth Ross canon.

THN: Is there anything else you can or would like to tell everyone about the story?

MR: It’s called “Trigger Warnings”, and it deals with both gun violence and women’s reproductive freedom.

THN: As I understand it, you have been a political satirist for a long time, and in order to be a great satirist, you have to know the subject matter.  How long have you been involved in politics and what got you started?

MR: I’m not really involved in politics, other than the fact that I vote and have a lot of opinions. I just like to take an interest in the world around me and have done for as long as I can remember. I think, as writers, we tend to write about things that wound us. I’m still naïve enough to look around me and be shocked at how petty and vile we can be towards each other. More than any single political issue, I think this is usually the target of my satire—our pettiness and seemingly inexhaustible contempt for each other.

THN: When Prez #1 hit the shelves back in June 2015, did you actually think we would get a real life candidate that would use media like Corndog Girl to actually make a run at president?

MR: Oh, yes. I think it was pretty much inevitable.

THN: Is there something particularly special about The Flintstones that lends itself to your satire and social commentary?

MR: The underlying commentary about consumerism. The idea that in order to take a photograph, you have to be okay with making a tiny bird with a stone sketch pad live its entire life inside this miserable stone camera. In many ways, it’s the perfect metaphor for modern, globalist consumerism.

THN: How many issues are you out on the Flintstones series?

MR: I am currently working on Issue #8 of The Flintstones. I’m hoping to make it through 12 issues to give it a nice, respectable story arc.

THN: Was that a conscious decision with the volatile comic market?

MR: But one never knows when the dark angel of cancellation might appear, so I try not to have too many loose ends or invest too much of what I want to say in the end of the story arc. That was the mistake I made with Prez, I think. Then when it got cancelled after six issues, I felt like I stranded my readers halfway into the story.

THN: The Flintstones and Prez both have had a lot of critical praise… How important is that you at this point in your overall career and comics career?

MR: It’s definitely nice. Prez didn’t sell a mind-blowing number of copies, but the fact that it had some critical acclaim got me some offers to write other titles. I hope maybe it buys me a mistake or two. That I can write something truly terrible and that people will still give me a chance because they liked my earlier work. We’ll see. Not that I’m planning to write something terrible.

THN: From my understanding, DC approached you about both Prez and The Flintstones, but if you were going to write any characters from their extensive library, anyone come to mind?  Is there a Superman project in store?  With him being labeled an American icon, some of the stories like Superman: Red Son and Action #900 seems to make the character prime material.

MR: I would love to write a Superman series. But I think DC has figured out that I’m not the guy you give the keys for the Ferrari. I’m the guy you give the keys for the broken down VW bus. Franchises and characters that can’t really be damaged more than they already have been. I think it amuses them to see how I’m going to bang the van against guardrails and ram it into buildings. Not so sure they’d be eager to see me do the same with their beloved sportscar.

THN: If you were going to write a story for the other big company, any character come to mind for your sensibilities?

MR: I would like to start writing my own characters, my own stories that aren’t shackled to a canon or pre-existing continuity. Not that I pay much attention to that sort of thing now.

THN: With the commentary you put into your comics and Twitter feed, I do not believe anyone would confuse you as a center-leaning.  Do you believe that limits your overall audience or do you think by knowing your exact audience gives you an easier time to connect with a built in audience?

MR: I never really write with an audience in mind. I just write something that I find funny or insightful and trust that there are other people out there like me. I think it’s self-defeating to try to pander to a specific taste or market, because readers you’re going for are probably smart enough to smell inauthenticity. Meanwhile, you are passing up the opportunity to connect with readers with whom you might really resonate. So it really only makes sense to put out work that is personally vital to you.

THN: If you had to break down this election cycle into certain parts… What has been the most infuriating part of it all?

MR: People’s willingness to be lied to.

THN: What has been the most interesting part of it all?

MR: The 2016 election reminds me of that scene in Das Boot where the submarine loses power and begins sinking to the bottom of the ocean. Nobody onboard knows what will happen first: either the submarine will hit the ocean floor and be saved, or it will keep diving until the exterior pressure causes it to implode. I feel like that’s where we are. We are diving. The bar just keeps getting lower and lower and eventually we will either find the floor below which we cannot fall, or we will implode as a nation. I’m not sure which way we’ll go.

THN: Has this election overall helped inspire your writing or are you getting too much to work with?

MR: Not really. For the most part, I write about longstanding grievances with life on Earth. I don’t react much to topical developments. Though, for someone who is generally pessimistic about politics, this election has been an embarrassment of riches.

THN: Do you have any other projects happening or coming up that you want to talk about or give us a preview?

MR: I’ve pitched writing another Hanna-Barbera property for DC, but it hasn’t been green-lit yet and I am loathe to say more. But it would be a pretty big departure, not only from the old canon, but from anything I’ve ever written before.

THN: I have to ask… Your twitter bio says “Master of Apes.”  Social commentary?  Fan of Gorilla Based Fiction?

THN: Thanks so much!

You can follow Mark Russell on Twitter and pick up The Flintstones #5 and Catwoman: Election Night #1 at your local comic shop this week. And if you have not checked out The Flintstones yet, why not use the Two Headed Nerd Amazon link and pre-order your copy of The Flintstones trade paperback?