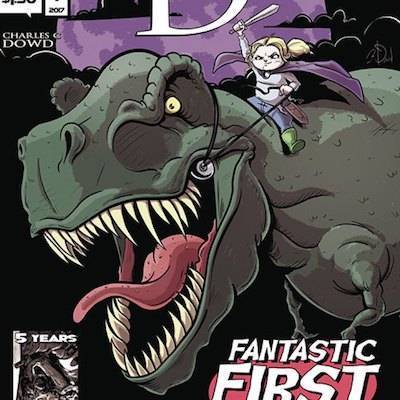 Welcome to another installment of Between the Balloons! This interview was made possible because of the great relationship I have with my local comic shop and its manager, Leo.  Anyone who follows me on Twitter knows that I review horror comics and am working on an upcoming kids comics review show.  Leo put Lilith Dark #1 in my hands because while it was kid friendly, it also had some horror elements, finding that sweet spot of interests.  After reading Lilith Dark #1, I knew I needed to talk to the creator, Charles Dowd.

Ryan Mount for Two Headed Nerd: Thanks for taking the time.  Let’s start with Lilith Dark!  Issue #1 recently came out and for those who did not get a chance to read it yet, what can you tell us about the character and the story?

Charles Dowd: Lilith Dark is about a girl with a wild imagination who wishes she could be a D&D type of beastie slayer, but soon discovers that you should be very careful what you wish for.

THN: Lilith Dark and the Beastie Tree was released in 2014, is this new series a continuation of that comic?

CD: Lilith Dark and the Beastie Tree is the collected original web-comic. This new series is sort of a re-telling of that story with its own canon. Readers of the original web comic will be familiar with the bulk of the story, but this new version has 100% completely updated artwork and a few significant changes that will allow the series to continue beyond this four-issue miniseries.

THN: This is a four issue limited series, how often is it shipping?

CD: The book is bi-monthly. Issue #1 was released in May, issue #2 will be out in July, issue #3 in September, and then the story concludes in November. The book will also be released on newsstands at Barnes & Nobles, Books-A-Million, and other retailers.

THN: Any long-term plans for Lilith?

CD: If this book generates enough interest, I’d love to continue the series. It depends on how well received the series is by retailers and readers. I’ve been living with these characters since about 2010, and I’d love to share some of the stories that live in my head with readers. Whether that will be as a traditional comic book run, a full length graphic novel, or a return to web comic form.  Right now, I’m just having fun reintroducing Lilith and the gang to a whole new group of readers and creating an even stronger fan base.

THN: Lilith is being put out by Alterna Comics.  Why print this on newspaprint?  It seems to be the exact opposite end of the spectrum since Lilith began as a web comic.

CD: From all the feedback I’ve received over the years, I’ve found that kids simply don’t read web comics, so it wasn’t until Lilith Dark was released in print that kids started to discover it. With this new series, going to print first made perfect sense. As far as newsprint, that was Alterna’s idea. They’re pushing an entire line of newsprint comics right now, and I was thrilled to be offered the opportunity to be a part of it. I think the newsprint push is a great way to separate our books from other publishers, too. I’ve been getting a ton of positive feedback over the whole thing.

THN: How and why are you only charging $1.50 for the first issue?  Are you all able to make any money of this book or are you putting it out there to get it into as many hands as possible?

CD: I can’t speak to the deal Alterna has with the printer, but I can say that getting Lilith Dark into more hands was the appeal to me, personally. Also, printing on newsprint is super cheap, so it balances out.

THN: What should comic readers know about Alterna Comics and how did your partnership with them get started?

CD: Alterna has an awesome line of creator-owned comics from a variety of genres. All-ages books like Lilith Dark, zombie books, horror, throwback superhero stuff, crime, they’ve got it all. It’s a great publisher.

CD: In addition to being white and male I am also a dad, husband and son to women. As I’ve grown and matured I’d like to think I’ve become a bit more enlightened, and as a dad I can’t stomach the idea of anyone telling my daughter that she can’t do stuff because she’s a girl. That’s just a ridiculous concept to me. After, I started working on Lilith Dark, I got a ton of feedback at conventions from parents and even young readers thanking me for creating a comic with a young female lead. Basically, my readers encouraged me to continue creating cool stories about cool girls who do cool stuff. There are already plenty of comics about angsty boys doing stuff, so I’m hoping to bring something new and different to my work.

THN: In your bio, you mentioned a love for horror, but your work is much more focused on a younger audience.  I review kids comics and horror comics.  Most folks would see that as a wide gap of genre, but what draws you to the opposite ends of the spectrum?

CD: When I was a kid horror films came on regular TV at noon on the weekends. I grew up watching Friday the 13th and Texas Chainsaw Massacre right after Scooby Doo and He-Man. In today’s world kids aren’t exposed to too much horror, which might not be a bad thing, but I know that when I was a kid I loved it. My very first comic back when I was in fourth grade was called The Gardener. It was about a serial killer who cut people’s heads off with garden shears. It was great! I try to add elements of horror into my kids’ books. Lilith Dark was originally conceived as a rip off of The Gate. Thankfully, it evolved into something different, but the horror elements are still there. The comic has plenty of monsters and cannibals, and you could even consider the Beastie Tree as sort of a gateway to Hell if you wanted to. I do try to avoid any machete kills, though. That would probably be going too far.

THN: Other than the obvious Kidthulu, (another Charles Dowd creation) what comics would you give to kids to introduce them to the horror genre?

CD: Honestly I’m not familiar with any kid-friendly horror books.  I think a lot of kid’s comics these days are kind of watered down and too safe to be honest. All I know is that kids want to be scared, and it’s fun. Look at the Goosebumps books. Those things still sell like crazy. Are there Goosebumps comics? If not, I’d like to draw some.

THN: Looking over your Twitter timeline, I saw you post some wrestling art.  Anytime I see the crossover of interest, I like to ask creators, with wrestling and comics being different story telling mediums, are you able to use any story mechanics from wrestling in your writing?

CD: I’d challenge your theory that the storytelling between wrestling and comics is different. Wrestling, The Avengers, Lilith Dark, are all about creating drama, good vs. evil, facing your fears and triumphing over obstacles. It’s all about creating emotion in the reader or viewer. Wrestling is Shakespearean in that the stories play out in the round in front of a live audience and circle around love, jealousy, a want for power, treachery, and comedy. So yes, I can say with certainty that I’ve learned a lot about storytelling from watching wrestling.

THN: Lilth Dark started as a web comic and you have plenty of other web comics, including Big Fat Charlie and He-Nuts.  What drove you toward web comics instead of the traditional comics format?

CD: I think the appeal for a lot of web comics are simply the immediacy of it all. I can draw a new comic strip and post it 5 minutes later and get feedback right away, whereas in traditional publishing you might work on something for a year and then you’re not allowed to post it online and you can’t get those cheap likes. Those likes are addictive. Everybody wants likes these days, hence the selfie craze. Web comics are the same.

THN: How often do you put them out?

CD: I’m more focused on finishing up the Lilith Dark series right now and not producing web comics with any regularity. I post them when I have time. They’re a fun thing for me to work on during my down time.

THN: Big Fat Charlie is more of a one to four panel observation and He-Nuts if more of a newspaper strip.  Was it conscious choice or just you experimenting with the medium?

CD: I like working in different styles. I think it’s healthy for an artist to diversify their styles. I know a lot of illustrators will tell you to pick one style and stick to it, but I’ve always had a tendency to ignore advice like that and do whatever I want. I’m a rebel, Dottie.

THN: What are you working on right now?

CD: Lilith Dark! That’s all I’m focused on right now. After that, I have a new Penny Powers story I’m working on that will be epic. I also have plans for more Kidthulhu and Big Fat Charlies, and a few other things I haven’t announced yet, so stay tuned.

THN: Anything you would like people to check out other than Lilith Dark?

CD: I want all of you to check out the new Alterna comics line. There is something for everyone, and at $1.50 a pop, there’s no better bang for your buck at the comic shop. Collect ’em all!

I want to thank Charles Dowd for his time and encourage everyone to go pick up Lilith Dark #1 and pre-order the entire series.  Also, check out his website cdowd.com where you can read his web comics and find all his work.  And of course follow him on twitter @CharlesCDowd.

Pressing Matters #13: 29 Books Back from Grading!