Welcome back to TALES FROM THE MARVEL LAKE HOUSE! While you’re all choking on a deluge of pumpkin spice, we’re all still recovering from our St. Paddy’s day hangovers and bracing ourselves for April Fools as it’s the last week of March at the Marvel Lake House. Here’s three books found lying about the coffee table of the Lake House that went well with some leftover corned beef and some Guinness hair of the dog. 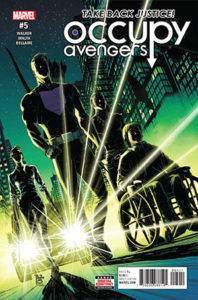 Your Solicit: Welcome to Dungston, Iowa, the manure capital of the state and home of a deadly secret. When the team’s van breaks down, they find themselves in the last place on Earth anyone would want to be, up against an enemy no one could see coming. Plus, the newest member joins the team…sort of. STRAIGHT FROM THE VISION, GABE WALTA COMES ON BOARD THE SERIES AS REGULAR ARTIST!

Possibly the worst titled book of all time, I’ve actualy enjoyed this ‘Hard Travelin’ Heroes’ take on the Avenging Archer (hell, Avenging Archer would’ve been a better title). Bear in mind though, I’m a total Hawkeye mark. So, faint praise and bias aside, this issue really didn’t do much for me. As the first in a new storyline, it was basically a lot of setup, (and don’t even get me started on the midwest Iowa stereotypes…) I just think there were some elements, such as a constant voice over narration that was confusing and unresolved, and a pacing that felt simultaneously choppy and slow, that didn’t hit the mark. To be honest, I’d never heard of David Walker before this series. He skews Clint too far into the bumbling goofball side of things for my tastes, and the way he writes Red Wolf…I feel he could be literally ANY other character and it wouldn’t change the story a bit. Walta on the art is heralded as a big get in the solicit, as he’s hot off of King’s Vision series; but I think he looks rushed here. His faces seem inconsistent and Clint looks off model. Overall this is a flawed issue in an already fun but flawed series. Leave it. 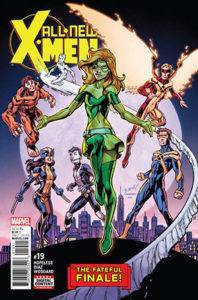 Your Solicit: Together at last! In the aftermath of the X-Men’s war with the Inhumans, the original five X-Men are reunited once more…but will they walk into an uncertain future together or apart?

Another end of a run, this issue marks the end of Dennis Hopeless’ take on the time displaced original 5. Of all the X-Books, this one seems to be the one that most have looked to as, if not exactly good, less horrible than the rest. I’d put it a healthy second behind All-New Wolverine which has been objectively good for it’s whole run. Throughout the series, Hopeless has done a commendable job of navigating these chronologically-challenged young mutants through a veritable minefield of never-ending events and cross-overs. He’s kept it mostly light and fun while keeping the gravitas of the mutant books of the past. I know the fans are divided on the original 5. In this issue, Hopeless gives us the best of all explanations as to why they are still here and here to stay. He and Diaz pull this explanation off in the best “show-don’t-tell” fashion that exemplifies masterful comics. This is a good close to a series that remained fun in spite of editorial indecision and heavy handed mandates. Buy it. 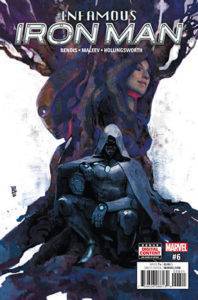 Your Solicit: Doom comes face-to-face with two of his most mortal enemies. Faces he never thought he would ever see again. This is a big turning point issue for Infamous Iron Man. His reputation is on the line. Can Victor keep on the redemptive path even in the face of total adversity? Will he even want to?

Overall, this series has been enjoyable as the unlikely scenario of Doom taking up the mantle of Iron Man has been rendered quite fun and believable by Messrs. Bendis and Maleev. This issue, while interesting, feels somewhat loose and unfinished. Almost as if there were pages cut or story beats missing. Still some highlights in the writing: Doom’s reaction to the Wizard getting one over on him is amusing, and his demeanor when confronted by Director Carter with S.H.I.E.L.D. is a handy reminder that, while Doom is playing the hero, he’s still not a good guy. There’s a flashback sequence in the beginning between Reed Richards, Ben Grimm and Doom from when they were in school, that seems almost non sequitur with the rest of the issue. Hopefully, it’ll be made clear in a future confrontation with this arc’s hidden big bad. Maleev’s art continues to shine. Consistently throughout this series he’s shown a mastery of both anatomy and tech while being cleaner and brighter than his previous Daredevil work with BMB. Excellent series, but a seemingly inconsequential issue. Not much happens and it’s a far too fast read. Leave it.

Between the Balloons: Darick Robertson