The Hollows #1 (IDW)
I’m a really big fan of Sam Keith’s art, this wasn’t his best work. Additionally the script is difficult and relies on exposition a lot. Still, the premise is interesting, I want to read more before I decide to stick with this or not.
Rating: SKIM IT

The Amazing Spider-Man #699.1 (Marvel)
This really should have been titled Morbius .1, but regardless this was a well written issue that sets up his history and the upcoming title. I enjoyed the art and the script a lot.
Rating: BUY IT

To Hell You Ride #1 (Dark Horse)
Interesting story about Native American legend, spiritual signs and…something? The art was good, but the color choices are washed out and left me feeling lacking. There is a lot of narrative, but not a lot of character work.
Rating: SKIM IT

Batman #15 (DC)
Yeah, this is freak stuff! If you have been reading Batman, you won’t be disappointed, if you haven’t, go back and get the last issue and the first trade, it’s a great run of comics.
Rating: BUY IT


Sherlock Holmes: The Lover Pool Demon #1 (Dynamite)
First let me say the cover art by Francavilla is great! This is a pretty good Holmes story, I liked it more than I expected to. If you aren’t a big Sherlock Holmes fan this won’t do anything to change that, if you are it’s a nice story to get into for more Holmes material.
Rating: SKIM IT


———————————————————————
Aaron Meyers is a full time nerd for both money and pleasure. When he’s not knee deep in networking cable or trapped in a server rack, he can be found on Twitter at @aaronmeyers or posting his musings about the world of comics at his blog Proactive Continuity. 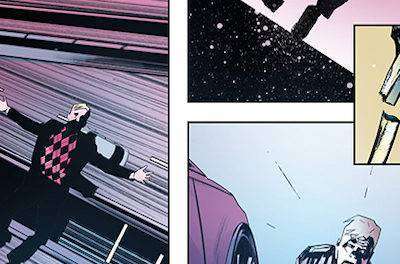