Gems in the Bin is a weekly column where I select a comic book from the $.25 bin at Fanfare Sports and Entertainment in Kalamazoo, Michigan for review. Will I strike gold or will I pay too much for an awful comic that should have been shredded? This week, I am reviewing Atari Force #10 from DC Comics.

Comic books based corporate trademark characters walk a Spinal Tap fine line of stupid and clever. G.I. Joe and ROM the Spaceknight are great examples of clever, so I had high hopes when pulled Atari Force #10 from the bin a few weeks ago.  ROM was referenced solely for the purpose of this post winning praise from Aaron Meyers.

I have no recollection of this comic from my 1980s days of comic book reading. The issue I pulled was titled ‘Home is the Hero’, and it chronicled the return of bad-boy hero Blackjak. Jose Garcia Lopez’s cover caught my eye as Blacjak is surrounded by a bunch of gun wielding aliens.

Atari Force #10 was a fun read and I enjoyed the artwork and story pacing.  It was a blend of G.I. Joe and Star Wars with a lovely touch of cheesy 80s sex appeal. 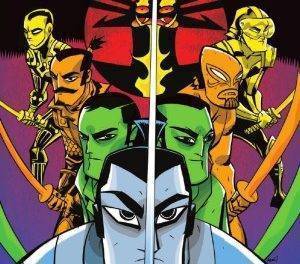