Welcome to Episode 228 of the Two-Headed Nerd Comic Book Podcast!

This week, we discuss the impending Godzilla/King Kong shared cinematic universe, the Y the Last Man TV show in development at FX, the upcoming Obi-Wan & Anakin series from Marvel, the return of Archer and Armstrong, and the Battle Angel Alita film in development from James Cameron and Robert Rodriguez.

Plus, The Orca is back for another installment of Take the Money and Run!

Our theme music is A Better Tomorrow by Dan the Automator. Other music found in this week’s episode was provided by the following sources: Big News Theme — Big News II by Clutch, Ludicrous Speed Round Theme — Fury of the Storm by Dragonforce featuring Dark Helmet, Take the Money and Run by the Steve Miller Band, GHETTOCHIP MALFUNCTION by Beck, Angel of the Morning by Juice Newton, I Don’t Get It by The Queers, Un Derecho de Nacimiento by Banda Filarmonica del CECAM, Superman Lover by Johnny “Guitar” Watson, Vietnam by Jimmy Cliff, Regret by New Order, I Don’t Remember You by Mudhoney, and many other fine songs that are copyright/trademark their respective artists/owners, but didn’t get listed because Matt is still editing as I type these notes. 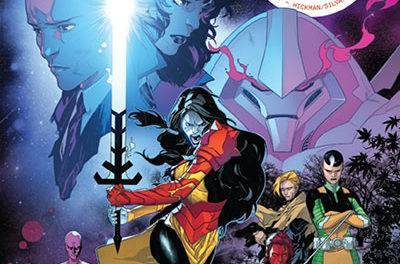 Two-Headed Nerd #539: A Schvitz and a Spritz