Welcome back to TALES FROM THE MARVEL LAKE HOUSE! So, I’m guessing con season is probably wrapping up for you all with NYCC right about now. Here, April Fools has just passed and Trump is still President, Kendall Jenner thought she could save the world with Pepsi, and we still haven’t figured out who thought ScarJo could play a Japanese Android. Hope you guys got better news from the con. On the bright side, I may have just read my favorite Marvel book all year. 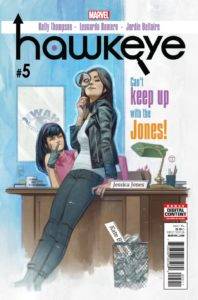 Your Solicit: WHAT WOULD J. JONES DO? NEW ARC STARTS HERE! Everything is coming up Kate! She’s got fancy new HAWKEYE INVESTIGATIONS window sign, a burgeoning P.I. business (albeit a temporarily unlicensed one), new friends and even some promising looking love interests on the horizon. So when her mentor, Jessica Jones, surfaces in LA on a case, Kate jumps at the chance to learn from the master (and show off, obviously). But the City of Angels has long history of crushing dreams…

As I’ve stated before, I’m a Hawkeye mark. I’ll read any book with the purple archer in it. I’m not even picky about which Hawkeye it is. Though I have to admit, this series by Kelly Thompson could have me for #teamkate all the way. Not since the revolutionary Fraction/Aja run has anyone been able to capture the whip smart dialogue and irreverent attitude of Kate Bishop quite like Thompson and company.

Issue #5 brings the beginning of a new story arc and it’s a great jumping on point. Jessica Jones makes what looks to be an arc-long guest appearance and she serves as audience surrogate, covering previous events through dialogue and context. Kate is obviously having a fan-girl moment with the experienced detective and Thompson uses this to great effect in a recurring motif of “Jessica Jones Tips” Kate provides in caption boxes. It’s a fun and interesting kind of mentorship between the two as Kate has been struggling for the entire series to establish legitimacy as a PI. She obviously sees working a case with Jessica as a golden opportunity.

The banter and dialogue Thompson gives Kate and Jessica harkens back to Veronica Mars, with just the right balance of crime noir and sarcastic snark.

We have a new artist on this arc, with Michael Walsh taking over for Leandro Romero (whose name is still strangely credited on the cover). Walsh’s art style is a good fit for the book and not terribly jarring from Romero. Looking back at his credits, he was a guest artist on Tom King’s The Vision (issue #7) but I hadn’t read anything else of his. I really enjoyed Romero’s work on this book for the first arc. Walsh looks to put his own spin on things without coloring outside the lines so to speak, and is definitely still benefiting from the consistently excellent color work of Jordie Bellaire. He has a considerably looser and more gestural style while still being clean and animated. His style skews just this side of classic Archie while still staying rooted firmly in modern superhero comics. If I had one nit to pick (sorry for the trademark infringement, Bobby) it would be that Walsh occasionally commits the cardinal sin of inaccurate archery depiction whereas Romero was quite consistent and true to the form. I made a point to include the Designer in the credits, as much like Daredevil’s ‘radar sense’ in the Rivera and Samnee drawn books, the design here by Manny Mederos does a lot to show how Kate translates her archery skills and marksmanship into investigation. Purple bulls-eyes narrow in on various details and points of interest that Kate picks out with these skills. It’s a fun motif that’s been used consistently throughout the series.

What makes this book so fun is that Thompson has taken an interesting premise – Kate moving out west and becoming a PI to separate her from Clint and the Young Avengers – and given Kate Bishop a platform to truly shine on her own. The book also carries a certain sense of self-awareness without ever being meta.

If you were a fan of TV shows like Veronica Mars, comics like Jessica Jones, or need something to fill the void left by Spider-Woman ending, this series is for you. Buy it.

Titan Comic Pressing: I Went Overboard at a Local Con!

Tales from the Vault #1: Origin Story