Kong on the Planet of the Apes #1 Review 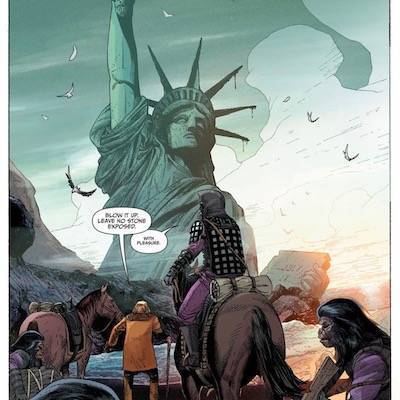 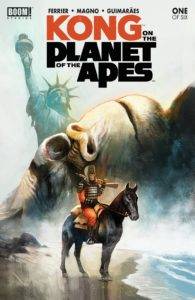 Kong on the Planet of the Apes #1 Review
BOOM!
Written by Ryan Ferrier
Art by Carlos Magno
32 pages $3.99


Solicit: The damn dirty crossover event you demanded! Following the events of the first Planet of the Apes film (1968), Dr. Zaius and General Ursus lead a small group of soldiers to the Forbidden Zone to destroy any remaining evidence of Taylor’s time among them. To their surprise, they discover… A KONG! Now they must venture to Skull Island with Cornelius and Zira to discover the truth, but they may not survive the deadliest journey of their lives!


Ryan Ferrier writes this crossover that takes place in classic Apes movies continuity.  Here Cornelius, Doctors Zaius, Zira, and the rest of the gang are brought in to investigate the corpse of a giant ape that washed up on shore.  Which leads to an expedition to find out where the beast came from, you guessed it, Skull Island.  The story moves a little slow but it’s very well written in the spirit of the old movies and Carlos Magno’s art is simply amazing on every page.  I can’t say enough about Magno’s detailed style and the detail he puts into the faces of these apes.  His eye for the classic costumes paired with his paneling keeps an otherwise slow, not bad mind you, just paced like the classic Planet of the Apes movies.  And of course King Kong is there.  I didn’t need a reason and neither should you.  We already knew this world was the future version of our own world where Charlton Heston ran around shirtless.  So sure, skull Island is still there too and I love it.  Boom has been handling these Planet of the Apes crossovers so well and the Kong crossover is no exception.