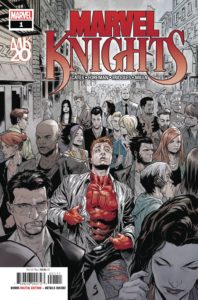 Solicit: In celebration of the legendary imprint founded by Marvel’s CCO Joe Quesada, a new crop of talent stands poised to tell a groundbreaking story across the Marvel Universe!
In the cemetery, the blind man does not know who he is, or why he has come to this particular grave at this moment.
He doesn’t know the burly police officer with the wild story who has approached him.
Or the strangely intense man who sits in the rear seat of the patrol car, his eyes flashing green.
But all of that is about to change.
Because Matt Murdock is beginning to remember…
In a colorless world without heroes, the spark of light…must come from the dark…

Donny Cates has been flipping the Marvel U on its head everywhere he’s been writing which, for the most part, has been the Marvel Cosmic U.  That said he’s also been writing a Venom story that I can’t believe I actually enjoy but I suppose it too has one foot in the cosmic.

Here Cates takes on the Marvel Knights cast, Daredevil, Punisher, Jessica Jones, more to come I’m sure and giving readers a very fun mystery with classic supervillain twist.  Most of this is set up for the bigger mystery and, no spoilers here, but this isn’t just a case of Daredevil losing his memory.  It’s much bigger than that.

Travel Forman has been doing amazing work at Valiant for the last few years and while I hope it continues, I gotta say it was great seeing him drawing the Marvel characters I love again.  That said, I cannot believe this creative team decided to bring back the Bullseye with a literal bullseye carved into his forehead.  I understand why they might need it for a plot point but WOW do I hate that leftover Ben Affleck Daredevil movie bullshit.

There’s some truly beautiful paneling here, especially the last page of Matt Murdock’s story with the blurred city lights in the background.  Forman is so talented at illustrating motion and I can’t think of anyone better to draw Daredevil at this point.

Marvel Knights was never my favorite imprint but it’s also not a bad place for these street-level heroes to live.  I like what Cates has started here and it’d be nice to see characters like Daredevil and Luke Cage save New York from a threat the Avengers and FF might not even know about.  Now please, bring Shang Chi and Iron Fist back in a way that we’ll care about Mr. Cates.

—————
Matt Baum is the producer, co-founder, and co-host of the Two-Headed Nerd Comic Book Podcast. He often threatens people with martial arts skills that he does not possess.