Guardians of the Galaxy #1 Review 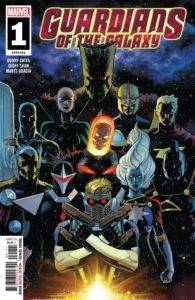 Solicit: WHO WILL STAND
The universe is on fire. Hundreds of worlds are at war. Never has there been such hatred and division across the cosmos. And in spite of all this, Thanos of Titan is still dead…or is he? Now, more than ever, the cosmos need the Guardians of the Galaxy…but in the aftermath of the Infinity Wars, who is left to answer the call? Featuring every cosmic superhero in the known universe by the THANOS WINS creative team of Donny Cates and Geoff Shaw!

Donny Cates has been given the tough job of making the Guardians title interesting again. Which could be tough for any other writer but keep in mind, this is the guy who made me enjoy reading a monthly Venom comic.

I was fine with the Bendis run for a while and Gerry Duggan did his best picking up the series and running with it, but after a while, Guardians fell into a humorous malaise. Not much was happening other than the team making fun of each other and returning to the status quo with each story.

From page one here Cates is shaking things up. Thanos is dead. Not dead with an exclamation point but maybe more dead with a question mark and all of the galaxy’s heroes are worried.

The book opens with a spread of nearly every Marvel Cosmic U character I love gathered to discuss Thanos’ recent passing and what happens next, while Peter Quill and the newly talking Groot (don’t love that) are looking for a new crew.

This is the truly nuts Guardians book I expected from Cates and it looks like it’s going to be a ton of cosmic fun.

Buzzkill and the latest Thanos series penciler Geoff Shaw continues his badass work here, taking time to give each of the characters in the book a distinct look and detail. His askew paneling lends it’s self to this space opera perfectly and man is his Starfox sexy.

All I wanted here was fun and that’s exactly what this creative team is delivering. Guardians is shifting to a massive cast with a massive cosmic story peppered with the humor we’ve come to expect.

—————
Matt Baum is the producer, co-founder, and co-host of the Two-Headed Nerd Comic Book Podcast. He needs to lose at least 10 pounds.