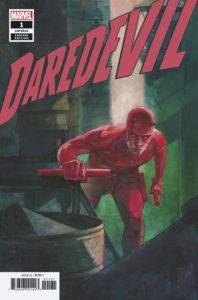 Solicit: Matt Murdock’s life almost came to a tragic end after a traumatic collision left him clinging to life. Now, after week’s of intense physical therapy, he has returned to Hell’s Kitchen.

Once again, Chip Zdarsky goes off brand and delivers a serious, introspective take on the Man Without Fear. I don’t want to compare this to Charles Soule’s run, especially not after just one issue, but Zdarsky basically hits the reset button here, stripping Matt down to basics: a blind man who “sees” the world from a unique perspective, struggling to reconcile his faith with the violent path he’s chosen. Zdarsky tells you everything you need to know about recent events in a few lines, making this issue a perfect jumping on point. The tone of the script feels similar to the Netflix series, which is a good thing in my book. The show did a great getting to the heart of the character, and Zdarsky nails it here as well. I also liked how Zdarsky didn’t spend a lot of time (or any really) reestablishing Matt’s status as a lawyer or reintroducing the supporting cast. This issue focuses on Matt alone, getting inside his head following his recent injury and learning that he may not be as recovered as he thinks.

Marco Checchetto’s art in this issue is incredible. Whether it’s a seedy bar, an ornate church, Matt Murdock’s lavish apartment, or the gritty streets of Hell’s Kitchen, Checchetto fills each panel with amazing, scene-setting detail. This issue is full of minor characters and Chechhetto does a fantastic job giving them all distinct features. You can almost feel every punch and kick of his action scenes. Checchetto also gives us a subtle redesign of Daredevil’s suit. With a more baggy fit and wrapped hands instead of gloves, it leans more towards a ninja’s uniform than a spandex superhero costume. Sunny Gho’s murky color palette is the perfect compliment for Checchetto’s moody art.

The Daredevil title hasn’t been able to hold my interest for years, but Zdarsky seems to have a real feel for the character. Matt Murdock is back on the bottom where he belongs and I can’t wait to watch him try and fight his way back up. 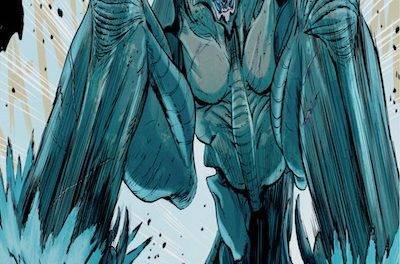