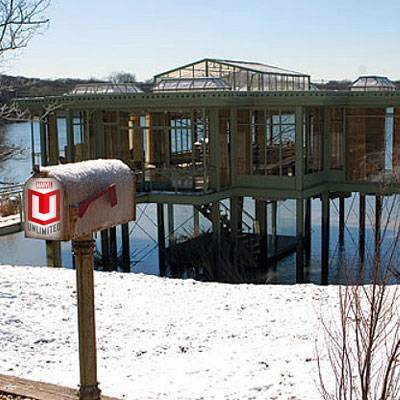 It’s time for more Tales from the Marvel Lake House: September 5th-12th, 2018! We’re a week away from the official start of Fall and it’s still hot as balls. Congrats to the boys on their 500th episode. I know big doings at the Distinguished Competition since they got BMB have been largely outshining the House of Ideas, but here are some books that tickled my fancy. 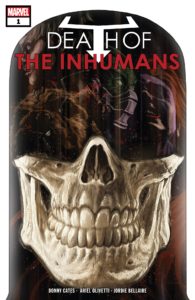 Solicit: THE TITLE SAYS IT ALL – HERE LIE THE INHUMANS. The Kree have gone murdering, leaving behind a message: Join or die. Thousands of Inhumans have already made their choice — the evidence floats bleeding in space. Black Bolt and his family are next. Rising star Donny Cates and PUNISHER: WAR JOURNAL artist Ariel Olivetti bring their brutal talents to the Inhumans!

I know Baum’s great battle cry is “Nobody cares about the Inhumans.” And to a large degree, he’s right. They’ve existed in a strange middle ground since becoming our Mutant Methadone during Marvel’s pre-merger temper-tantrum. So there’s a certain logic in making next story, “The Death of the Inhumans.”

Writer Donnie Cates is definitely proving his mettle as Marvel’s go-to writer of stories with a high level of difficulty. He paints an interesting picture of an extremist group of Kree with an uber-inhuman named Vox attempting to thwart a prophecy that states Black Bolt and his ilk will be their undoing. What I find most fascinating about this is the finality Cates gives these events. For the large part in superhero fiction, the stakes are mostly stagnant. It’s not if the hero will survive, but how. But in the first issue alone, we’ve already lost a large number of Inhumans, including Maximus and Lockjaw (the second dog this year that Cates has taken from us BTW…). For me, what this does is give the story depth and gravitas that I haven’t seen in a book since the Death of Peter Parker in Ultimate Spider-Man, or the end of the first Civil War. I’d say my only partial gripe here is that Olivetti’s art is looking more and more like a poor man’s Frank Quietly and frankly, the style takes me out of the story. A small gripe as he is quite obviously an accomplished artist, I’m just not sure about some of the style choices. Overall, interesting stuff from a group that has been maligned and mishandled quite a bit lately, but I am definitely sticking with it to see how it ends. 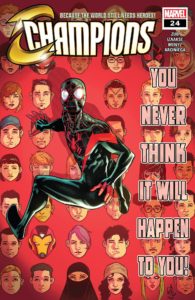 Solicit: THE CHAMPIONS GRAPPLE WITH A FOE THAT ALL THE SUPER-POWERS IN THE WORLD CANNOT VANQUISH!

Now I know I reviewed the last issue of Champions and now I’m reviewing two in a row. But this issue is far too important to pass up. Zub takes what could be a saccharine, ham-fisted attempt at the ‘very special episode’ and deftly walks the tightrope of confronting these fictional teens with a very real threat to children across our country.  When Miles gets a notification that there’s been a school shooting at his school while he was playing hooky with the Champions, he and the rest of the team have to handle the guilt and the grief each in their own way. Zub expertly gives each member of the team their own moment of dealing with the situation, while rightfully focusing on Miles, Riri, and Kamala. Miles seems to go through a ‘Spider-man no more’ like phase, (complete with a subtle visual homage of the costume draped over his bed, like the garbage can in the original). Riri, whose own life has been riddled with gun violence, seems to shut down and take the cynic’s stance. Ms. Marvel is given the last word here and seems to be stepping up in maturity and leadership while giving Miles the pep-talk he needs to recover. I know I’m giving this story short shrift in this review, but I haven’t really heard anyone else discuss this book so I’m telling all of you out there in the future to give it a read. 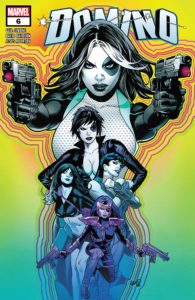 Your Solicit: Project Armageddon wanted a Super-Soldier they could control… A weapon they could point… A trigger they could pull… Instead, they got PURE CHAOS. Neena Thurman’s past collides with the present and nothing will be the same again. Don’t miss the stunning conclusion of KILLER INSTINCT!

The final issue to the solo series no one knew they wanted, but that we all needed. Gail Simone has taken a sideline character that has the dubious distinction of being introduced at the same time as Deadpool and given her fun and well-rounded solo series. While Neena’s been fleshed out some since her initial Liefeldian beginnings, we still knew little about her past and her powers. Simone fills in many of the blanks while also giving her life and purpose outside of the X-Men and X-Force. The inclusion of Shang Chi was both surprising and exciting, and the sexual tension between the two was palpable and fun. Simone’s resolution of their relationship was tragic and very real. Outlaw and Diamondback are fun characters but I would’ve liked a little more from them and about them. Baldeon’s art is the perfect compliment to Simone’s scripts. His pencils give a wonderfully expressive quality to the faces while maintaining an aggressive approach to the action, walking a fine line between animated and more anatomical. Overall a fun series that I hope will be looked upon fondly in the years to come. If you’ve not been following the series, get out there and GET CAUGHT UP!!!

Well, that’s it for now. I read some other stuff that I definitely have thoughts on, but I think I hear another temporal portal opening up, so I’ll try to send another recording through. Until next time, remember if you’re not in a hurry, and not paying cover, everything deserves a chance…

——————
Jeffrey Ketcham is a writer of imaginative fiction in comics and prose. Otherwise, he’s been a professional musician, barista, bartender, and musical instrument repairman. He’s an unabashed geek and aficionado of all things comic books, dogs, genre fiction, good coffee, and Irish whiskey.

Between the Balloons: Jim Zub