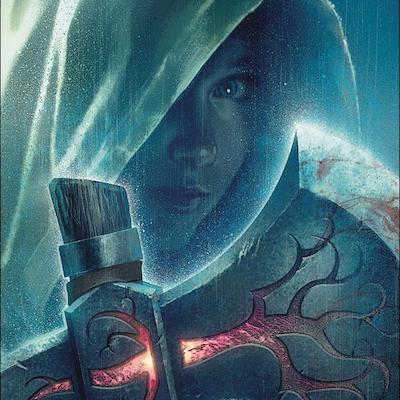 Solicit: The rain lashes the grassy dunes of Brody Island, and seagulls scream above the bay. A slender figure in a raincoat carries a large wicker basket, which looks like it might be full of melons… covered by a bloodstained scrap of the American flag.
This is the story of June Branch, a young woman trapped with four cunning criminals who have snatched her boyfriend for deranged reasons of their own. Now she must fight for her life with the help of an impossible 8th-century Viking axe that can pass through a man’s neck in a single swipe-and leave the severed head still conscious and capable of supernatural speech.
Each disembodied head has a malevolent story of its own to tell, and it isn’t long before June finds herself in a desperate struggle to hack through their lies and manipulations… racing to save the man she loves before time runs out.
Plus, in the premiere chapter of the backup story “Sea Dogs,” which sails across all the Hill House Comics titles!

Suggested soundtrack: The Horrors of Hellhouse by Slasher Dave.

Review: This is the first of Joe Hill’s Hillhouse horror imprint and like any good horror comic it starts off creepy and then tries to lull the reader into a false sense of security with some pretty amazing art and great characters.

On page one, the story states it’s set in 1983 but there was some weird old-timey dialogue like “my best girl” “String-em up by their buster browns” mixed with modern meme culture quotes like “living my best life” that threw me for a whirl. I don’t like starting reviews with a gripe, albeit a small one, but it took me out of what was otherwise a great setup.

Leomacs is outstanding. He has a silver-age horror style that reminds me of Francesco Francavilla’s work. The art and coloring give the book a classic DC horror look that really works for the story. There was one weird panel where a woman is taking the phone away from her ear to speak with another character and he draws her with two heads effectively. Other than that I thought the layouts and pencils oozed with classic horror style. 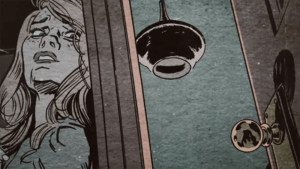 Hill does an excellent job capturing the feel of a classic 80’s horror film by taking his time to introduce us to some very likable characters that no doubt will have some terrible things happening to them soon. It makes the reader care about the young deputy and his girlfriend who will soon be wielding an ancient Viking ax that cuts off heads with one swing and magically allows the heads to keep talking.

We don’t get any of that in the first issue but Hill does a wonderful job slowly building the tension as a small tourist town is dealing with a breakout from the local penitentiary which just happens to be Shawshank. Must be nice having Stephen King for a dad. The story begins with a brief glance of what the main character will be when the real horror kicks in but I liked the pacing here. It reminded me of the first 30 minutes of Jaws where we got to know Roy Shcider and Amityvillve before the shark started eating the inhabitants.

Basket Full of Heads has a ridiculous premise that can only work in the pages of a comic styled after the DC horror comics Hill read as a teen and I can’t wait to see where it goes from here.