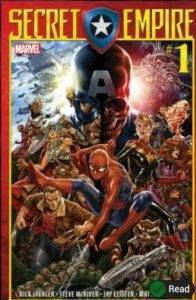 It’s time to take a look Through the Lake House Lens: Marvel Events! Of all books that we get around here at the Lake House, event books are the most difficult to enjoy. The six month time shift means that by the time I read most event books, they’ve most likely been spoiled, critiqued, and often, already replaced with the next Big Event ™.

In the time that I’ve been the Caretaker of the Marvel Lake House, we’ve had four Big Events ™ and five smaller ones roll through.

First, we have the erstwhile and oft raged about Secret Empire. At the time of solicitation, I was down for the story, thinking it was an interesting concept and an original take on a character that’s been around long enough to have almost every story told about him. By the time the story came across the Lake House, it’d already been discussed into oblivion and the creators had allowed the story to fall under the weight of toxic fandom to the point of impotence. The dissonance between what I thought the story could be and what I percieved to be the compromises the story was forced into due to ‘Fan Outrage’ was too much to reconcile.

Next were a couple of Venom crossover’s that I elected to skip, because, well… it’s Venom. I keep hearing that Cates is making that character worth reading, so maybe I’ll go back to it someday. I still haven’t seen the movie, either. 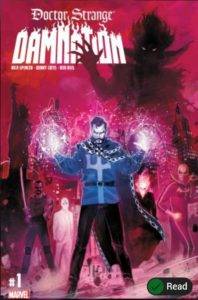 Next was Doctor Strange: Damnation, and I really enjoyed this one. The story of a recently re-powered Doc Strange gambling with Mephisto to save the souls of a resurrected Las Vegas while also trying to make up for his own hubris was an enjoyable and beautifully illustrated story. Here at the Lake House it also felt overlooked and as such I made a point of wanting to cover it. I’m also a huge Doc Strange mark so that helped. With it being somewhat smaller and more contained as well as being one of the few spin-offs to come out of Secret Empire all played into it being well received here at the Lake House.

Next was Spider-Geddon. This one was a slog, and I largely overlooked it from a coverage aspect. What I read of the event was enjoyable but by the time it’d come around to the app, I’d already been indoctrinated in the “this again?” critique that many in the industry felt at the time of it’s release. There were also some problems with the publication order on the app that made the event as a whole hard to read.

Infinity Wars was next, and was one of THN’s first TL/DR segments, so I skipped it. Marvel Cosmic has often been a blind spot of mine and it was no different here.

Age of X-Man is still going on here at the Lake House, and in the shadow of Hickman… it’s honestly insufferable. Largely inconsequential and much less interesting than the Refugee X-Men tale being told by Rosenberg in the doomed main X-Book.

That brings us to No Road Home and War of the Realms. We’re nine issues in to NRH and the War of the Realms has really just kicked off. NRH has gotten quite a bit of good press at initial release. Here at the Lake House it was a harder sell in concept. I’m traditionally not a huge fan of Hercules or the mythic Marvel characters. I’ve only just recently gotten into Thor with the MCU versions and Aaron’s run. Also, one of the biggest hooks of the book was the inclusion of Conan, which I could honestly not give two fucks about. That being said, in execution all of those elements were brought together in such an interesting way and with the bonus inclusion of some great Hawkeye moments that I’ve been enjoying it quite a bit. I really can’t wait to see the conclusion of the story. 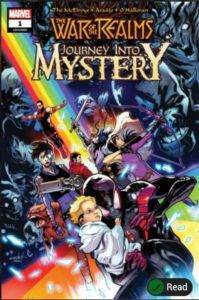 War of the Realms has been interesting so far. I know the boys on the show did a TL/DR on this one too, but so far I’m pretty well hooked by the McElroy’s Journey into Mystery of all things. I’m sure the inclusion of Hawkeye and Miles is probably my biggest hook, and time will tell how their depiction of my precious Kate will stand up to Kelly Thompson’s (who may have spoiled that character for everyone ever.)

I’m not going to say that the Lake House has event fatigue, (I, too, like Matt, hate that term) but I will say the six month delay does make these “must read” events a little more difficult to experience objectively. But I thought it would be interesting to take a look at the recent events through the Lake House Lens.
As always, if you’re not in a hurry and not paying cover, everything deserves a read. 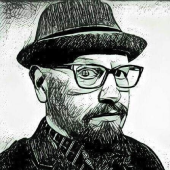