Tales from the Marvel Lakehouse: Doctor Strange by Mark Waid

It’s time for more Tales from the Marvel Lakehouse: Doctor Strange by Mark Waid! Lately, as we come out of the event that was War of the Realms, I’m finding that the books I find most appealing are the solo books of what would be considered smaller or lesser characters. 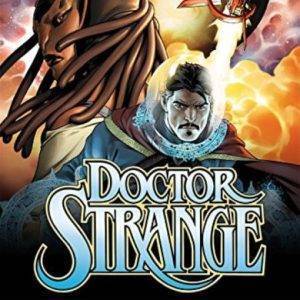 I want to give a nod to Mark Waid’s run on Doctor Strange. The initial hook of putting Strange in space to look for new sources of magick was initially interesting. Though it might have drug on a little longer than necessary. Since his return from space, Waid’s take on the Sorcerer Supreme has focused on shorter arcs and positively crackled with novelty and vibrance. We’ve been treated to an imposter Strange who turned out to be a missing former student, a Magical Accountant, a showdown with not only his arch-nemesis, Dormammu, but also his entire race, the Faltine, and finally Strange was finally pit against the Devourer himself, Galactus. We’ve revisited some early story concepts, such as the price of magic, and new concepts as well, such as the division of magic and science with Galactus being banished to the Mystic Realms.

I’d say the only real misstep of this run outside of the length of the initial arc, would be Waid’s resolution to the Galactus arc. *Spoilers* To have Strange allow the entire universe to be wiped away and rebuilt entirely from his memories should’ve had more weight and consequences to it. Instead, it was handled as rote and not discussed or even examined beyond the pages in which it happened. Hopefully, this will be something that comes back to haunt not only Strange but the 616 as a whole. As it stands, it feels like a throwaway Deus Ex Machina cheat, as if Waid couldn’t think of any other resolution to the story than to hit the reset button.

I think what has been the real shining point of the run so far for me, is the shorter, interstitial stories between the main arcs. Issue 9 shows Strange defending his Sanctum Sanctorum over the years against the most insidious of enemies, gentrification. It’s an incredible character piece with an excellently executed twist ending that plays upon the expectations of the reader in believing that Strange’s home and entire being could and should be wrapped up with the deliberately nefarious and occult. The reveal being a confirmation of the true affection Strange feels for his neighbors is a pleasant turn. This turn shows a genuinely human side to Stephen’s character that is emphasized by contrast to the theatrics and over-the-top tactics he employs to dissuade the real estate developers throughout the issue. Overall, it’s an excellent exploration into the character of Strange.

The most recent issue, 18, has been my favorite yet. A one-shot story about Strange tracking and banishing a water demon from a suburban Kansas home was everything I ever wanted in a Doctor Strange story. This story best depicts Strange as he’s often observed from the outside, a mysterious expert that appears seemingly out of nowhere to eliminate a problem that only he can solve (and most likely only knows about.) While this is a well-worn trope by now with characters like Sherlock, House, and Constantine, this plays well as a direct contrast to the character revelations from issue #9. These two one-shot stories work as excellent bookends showing the two extremes of Stephen Strange.

Jesus Saiz’s clean, slick art style has been an excellent complement to Waid’s storytelling. Balancing the high tech futurism of the cosmic elements in the initial arc with the more realistic features in the character’s faces is where Saiz really excels. If I had one criticism of Saiz’s art, it would be that occasionally the digital effects in the coloring and backgrounds can be a bit too apparent and take me out of the story.

I know that there are only two issues left in the current run. Those of you in Real Time™ are nearing the start of a run called Surgeon Supreme. But for now, here at the lake house, I’m enjoying Waid’s throw-back approach to my favorite Sorcerer in the Marvel U, and if you haven’t already, you should too.

Pressing Matters #10: Why I Press

I’m on a Boat: Why I Didn’t Pass on The Massive