Tales from the Marvel Lake House: Acts of Evil: the Good, the Bad, and the Ugly 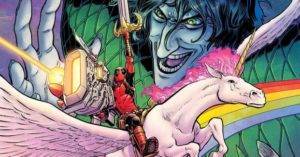 Welcome to more Tales from the Marvel Lake House: Acts of Evil: the Good, the Bad, and the Ugly! Back in the olden days of 1990, Marvel published an event called Acts of Vengeance. The premise was that all of the villains got together and decided to switch partners, the idea being that their counterparts would be ill-equipped to deal with them. Not a new concept by any stretch, and definitely one that would be revisited again (certainly seen to its logical conclusion in Old Man Logan.) Fast forward to now, here in 2019 Marvel has revisited the concept surprisingly quietly with a new event called (rather unimaginatively) Acts of Evil. Where the 1990 Acts of Vengeance was a coordinated continuity event led by Loki and taking place over 50 issues in two years, here Marvel’s kept it to just 8 issues, all Annuals with little continuity involvement.

As with any event or initiative, there’s always a spectrum of varied quality, and this one is no different. Some of these annuals felt fresh and new, while others seemed like throwbacks to an earlier era. Some of these one-shots felt relevant and significant to the characters while others seemed out of character and rather throw-away. Here’s the good, the bad, and the ugly from the event. 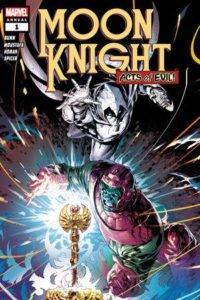 Your Solicit: MOON KNIGHT  BATTLES KANG THE CONQUEROR! KANG THE CONQUEROR has found a way to rewrite history in his own image! But when the chance to settle an ancient grudge against the Egyptian god, Khonshu, tempts Kang, the process is interrupted and time and reality quickly go haywire. Now, Khonshu’s avatar, Moon Knight, must find a way to fix the time stream before Kang is able to complete his goal! But with time acting erratically, there’s no telling where Moon Knight will end up – or WHEN! 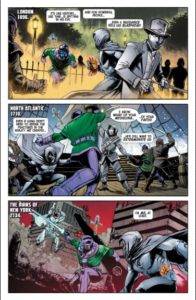 Anytime we get alternate timelines or alternate versions of the character, some of the toughest things to do are to give them stakes and make them feel relevant to the character. Bunn and crew accomplish both here with flying colors. In an event meant to pit our hero against a foe he’s ill-equipped for, this matchup feels simultaneously surprising yet inevitable. The cross-time chase with the various historical versions of Moon Knight echoes Fraction and Brubakers Iron Fist legacy characters in the best way possible with some of the coolest costume designs since Ellis’ Mr. Knight. The premise of Khonshu being the god of travelers, and having those include time travelers as well, is a stroke of sheer genius.

I’ve been a fan of Ibrahim Moustafa since his work on High Crimes with Chris Sebela. I met the man at the first OCon and he was as nice as he is talented. Here he’s paired with Matt Horak while both he and Horak are colored by Mike Spicer. Moustafa and Horak meld seamlessly to me. Their complementary styles along with Spicer’s muted color palette give this book almost a bronze age feel. As I stated before, the costume designs on the alternate history Moon Knights are fun and exciting. Overall, this annual did something for me none of the others could do. It felt like it counted and moved the character forward. Something that’s notoriously tough to do with an event, let alone an annual event. 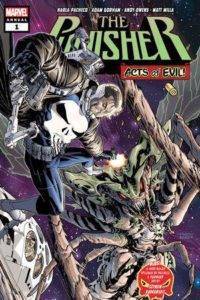 Your Solicit: ACTS OF EVIL! PUNISHER VS. BROOD QUEEN! The man who lives to punish the foulest parasites of humanity. The most monstrous parasite in the galaxy. Zero gravity. Zero &$%# given. It’s the PUNISHER versus a BROOD QUEEN like you’ve never seen before, because this time, Earth’s own Frank Castle’s got a rocket. Who put Castle in the cockpit, and how will he and his muckraking stowaway – J. JONAH JAMESON (???) – tolerate each other long enough to survive? Only Karla Pacheco (Rick and Morty) and Adam Gorham (NEW MUTANTS: DEAD SOULS, ROCKET, The Violent) have the answers you NEED!

Okay, I’ve been on the record to not being the biggest Punisher fan. I tend to think he works better as a side (or maybe even just a seasoning) instead of the main dish. That being said, when written well, I do enjoy Frank when he’s a fish out of water. Unfortunately, that just wasn’t the case here. Pacheco’s story here feels almost more of a JJ

J story rather than a Punisher story, and it skews the tone completely. Instead of a fun take on Aliens, which the Brood have always been, instead, we get a weird slapstick buddy comedy with a Punisher that might as well have been a cardboard cutout with guns. Even the premise that the shuttle they got stuck on was being hijacked by Russian operatives felt out of place and a throwback to the Eighties.

The art was by Szymon Kudranski and why people keep hiring this guy, I don’t know. ‘Nuff Said.

I’m all for taking a stoic, violent, and over-the-top character like Frank Castle and taking him out of his element, but this is just silly schlock that feels completely out of character for everyone in the book, the Brood Queen included. 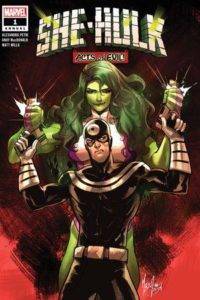 Your Solicit: ACTS OF EVIL! Bullseye being hired for an assassination? Just another Tuesday. But when he decides to pin it on She-Hulk? Bad idea. Strap in as everyone’s favorite lawyer-slash-Hulk, Jennifer Walters, takes on the mad marksman in a classic case of character defamation…with a heaping helping of SMASH. Plus: Robots! Why? Well, you’ll just have to wait and see…

She-Hulk’s been through some changes recently. Since the conclusion of Civil War II and her transformation into a grey Hulk, and recent time with the Avengers and having difficulty controlling her gamma radiation, the character has been in a bit of a state of flux. So, you know what Jen Walters doesn’t need? A body-swapping story with f*c%ing Bullseye. Not only body-swapping with Bullseye but done so by a z list villain like Machinesmith.

The already flawed premise starts out with Jen waking up in a robot body and then she and the readers have to piece together this half-assed plot. I’m not sure when this was written but there’s out of continuity markers everywhere, from Jen’s constant (and controlled) green state, her old costume, and inclusion of a clean-shaven Reed Richards giving a presentation in what looks like the Baxter Building.

The art was clean and overall unmemorable. The character models felt more like the marketing versions you get on action figure shelves vs any artist interiors for storytelling.  Of all of the annuals put out in the Acts of Evil event, this one felt the most haphazardly conceived and poorly executed to the point that I caught myself skimming through most of the book.

Now I don’t want to leave on a down note, so I’ll do some quick hits on the remaining books.

So, with all that, I’m off to read some more comics. House of X and Powers of X have just come in here so I’m going to plow through them again and see if they hold up. I’d thought about re-reading all of Acts of Vengeance, but realized I’d have to be locked into my house for a couple of months to get through all that…

Anyway, remember if you’re not in a hurry, and not paying cover, everything deserves a chance…

JD Ketcham is a writer of imaginative fiction in comics and prose as well as the owner of Planet Fiction Productions. Otherwise, he’s been a professional musician, barista, bartender, and musical instrument repairman. He’s an unabashed geek and aficionado of all things comic books, dogs, genre fiction, good coffee, and Irish whiskey.

Back Issues #13: Looking Out for Defects – A Presser’s Advice