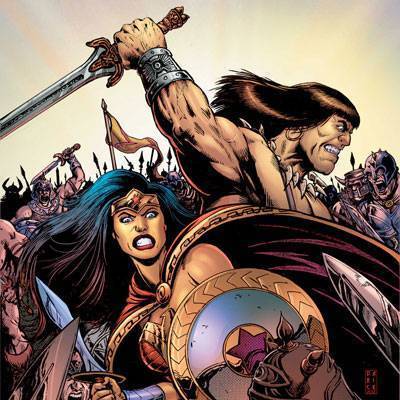 Solicit: What makes one a legend? How do legends carve their names into history, when countless others are forgotten? Wonder Woman and Conan the Barbarian are destined by the fates to be legendary, but when their stories collide, will both emerge victorious, or will the fickle Gods cut their lives short? Co-published with Dark Horse Comics.

Gail Simone takes the refreshing step of not bothering to come up with some hackneyed reason that Wonder Woman is meeting Conan but instead drops us into a familiar sword and sorcery tale as only Conan can deliver with amazing art by Aaron Lopresti.

On one of his many wandering adventures Conan happens upon an Aquilonian about to have his jaw burned off by North men for welching on a bet.  After being promised riches Conan frees the Aquilonian in typical grisly barbarian fashion with excellent gory action by Lopresti.  The two then head for a near by city ruled by an iron-fisted king who forces gladiators to fight for sport and of course betting.  Turns out the Auquilonian has bet everything he had against a mysterious female gladiator that can’t win, because she’s a girl of course.  Well, you guessed it, this mysterious gladiator is Wonder Woman and Conan is in love at first sight.

Simone’s script reads as good as any Conan title I’ve read with excellent lettering by Saida Temofonte.  Lopresti’s clean lines and amazing detail capture the world of Conan perfectly while keeping the action swift and bloody. It almost doesn’t even matter why Wonder Woman is there when the story and art are this good.  I’m on board for this whole Conan Wonder Woman crossover.

Gems in the Bin: Deathlok #5