GEMS IN THE BIN: THE MICRONAUTS (THE NEW VOYAGES) #11

Gems in the Bin is a weekly column where I select a comic book from the $.25 bin at Fanfare Sports and Entertainment in Kalamazoo, Michigan for review. Will I strike gold or will I pay too much for an awful comic that should have been shredded? This week, my selection is The Micronauts (The New Voyages) #11.

Aaron Meyers is totally jazzed about this review because he is a Micronauts super-fan.  I like to use the word “jazzed” because I feel it is an under-used word. Make an effort to use “jazzed” in a sentence this week.

When I pulled this comic from the bin, I knew I had a winner. How could you go wrong with The Micronauts? It has been ages since I have read one of their titles, plus I was surprised that they had a New Voyages title. Now I know, and knowing is half the battle. That little G.I. Joe reference was intentional because both The Micronauts and G.I. Joe were popular toy products that were turned into fantastic comic books. I’ll give the edge to the Larry Hama era of G.I. Joe, but I was very impressed with The Micronauts (The New Voyages) #11.

The team of Commander Rann, Acroyear, Marionette, Solitaire, Bug, and Huntarr have traveled the galaxy to track down a distress signal only to find themselves blocked by the impenetrable spacewall. Enemies converge on our heroes, so they must prepare for battle. The power of the spacewall keeps our heroes safe, and they discover a massive spaceship has attached itself to the spacewall.

The Micronauts (The New Voyages) #11 was a fun read. The story was well-paced and there was plenty of action and suspense.  There is a portion of the story that seems to be a total rip-off of Alien, and it is partly visible on the cover. Acroyear, Huntarr, and Bug board the giant ship attached to the spacewall, they discover the body of an alien inside the ship, and it is seated on a chair just like that giant alien from Alien. I’m willing to look past that rip-off and say that this was a great selection from the bin. If you are a sci-fi fan then you’ll really dig The Micronauts.

The TD Dubs has spoken. 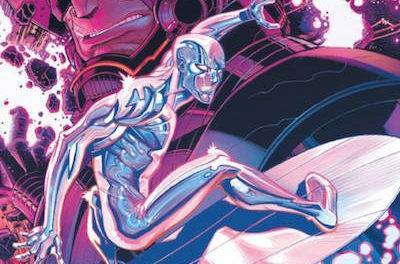