“Alone he fled, and came in from Outside. Upon the seething streets of Planet D he landed, in his armor and his rage. With General at his side and Wall behind, he wrote his name in blood across the worlds, worlds he would conquer, filled with foes to crush. He formed the Mob and set their star alight, the guns and gangs, machines and magic theirs, the red ambition his and his alone, until the System shuddered at his name: Destructor—the most dangerous man alive.”

This webcomic is for the guys and gals who love the bad guys. The ruthless, unrelenting and cunning bad guys who crush civilizations until the point they have no choice but to submit and become a new cog in an ever-expanding war machine that is pointed at the next sap standing in the way of domination. Yeah, those kind of dicks.

Destructor looks like a pissed off version of Sledgehammer (ya know, the WW2 equivalent of Iron Man found in the pages of Dark Horse), mixed in with the brutality and ruthlessness of Golgoth (that prick from Mark Waid’s Empire).  Throw in the action of Atomic Robo and Prison Pit, and you have the stew that is Destructor!

Nothing can stop our tattooed, titular character from crushing his opposition underfoot, and he is not afraid to get his hands dirty! The first arc of the comic follows Destructor as he bashes his way through a crocodilian race of people, smashes through their castle and then finally turns their champion into a bloody pool on the ground. Hellaciously rompy. Gorgeously trashy. Sexaliciously violent.

I think you are getting an idea of what I might be saying about the comic, but just in case my writing has failed to get you interested, let’s look at a couple of panels of the beautiful art: 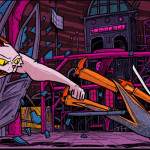 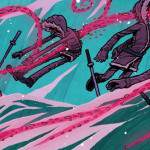 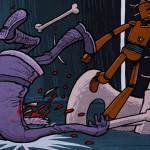 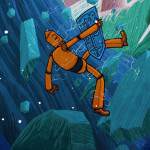 One of my favorite comics I have read recently, Destructor may have a slow publication schedule, but there is plenty built up to give you 20-30 minutes of comics to enjoy. And this is one that begs to be collected into print when finished, much in the same way as God Hates Astronauts did. Check out Destructor, and root for or against Destructor … it doesn’t matter: He is going to win, and he’s gonna win by any means necessary!

—————–
John is what you would call a triple threat: he could die from a coronary, at the hands of a biker gang or by clumsily falling down a flight of stairs. He sometimes writes for Two-Headed Nerd, but more often won’t shut up on his own (now defunct) podcast Burnt Weiners. Check him out on Twitter with the following secret password: @burntweiners