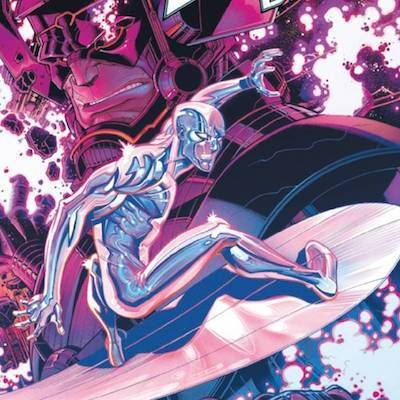 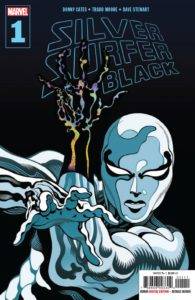 Solicit: Spinning out of GUARDIANS OF THE GALAXY #1, almost the entire galaxy’s defenders have been blown through a black hole, including the Silver Surfer! But the story doesn’t end there… In order to fight back the oblivion, Surfer will have to fight to save his own soul and not lose himself to the void. Follow the Sentinel of the Spaceways on a journey that will change him forever!

The Silver Surfer is far and away one of my favorite Marvel characters and has to be one of the hardest characters to write in comics today. It can be so easy to get lost in the Surfer’s soul pain so masterfully written by creators like John Byrne, Ron Marz, Jim Starlin, and J.M. Dematteis to name a few. So many others have fallen flat with this character but Donnie Cates, as he’s proven with so many of the MCU cosmic characters, just gets it.

This story spins directly out of the pages of Cates’ Guardians of the Galaxy title which is must read, top of the pile stuff, and was partially spoiled by last week’s Guardians annual (Joe gave it a Buy It).

Cates writes the Surfer fighting the very forces of universal creation and sacrificing himself to save his compatriots who were sucked into the black hole with him in the pages of his Guardians title. There he meets some truly alien foes and one that Cates fans may recognize.

The real star of this issue is artist Tradd Moore whose time on the Ales Kot Image book The New World has transformed his art style into something sublime. Moore is channeling Mobius and Stanley Kubrick circa 2001: a space odyssey with some supremely psychedelic art and purely insane backgrounds.

I fell in love with Moore’s hard line and geometric style on his Luther Strode titles at Image but he’s become so much more since then. His style has loosened and rounded while holding onto his unique perspective making him something truly special. 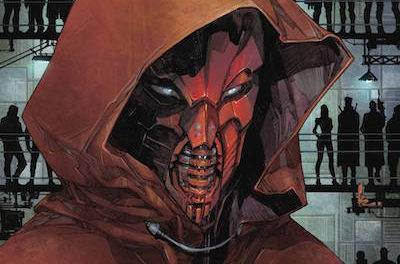